JUST WHEN HE THOUGHT IT WOULD BE AN ORDINARY DAY,
A LITTLE SHEPHERD TAKES A JOURNEY AND GETS A SPECIAL SURPRISE.

Home
"Because He is special enough for everyone!"   -Shelby​ 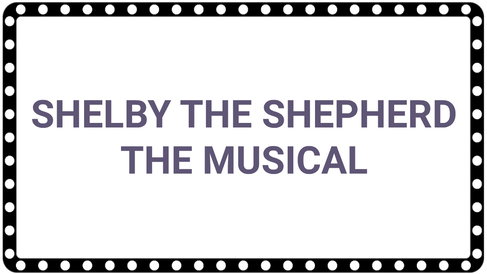 A QUICK GLIMPSE
Delightful, surprising, engaging, and funny, Shelby The Shepherd, The Musical - A Shepherd's Special Surprise has been adapted for the stage from the book, Shelby the Shepherd and His Special Surprise, by its author, Wendi Miller.

Shelby is a young boy whose family members are shepherds during Biblical times. He is a shepherd-in-training who is allowed to have one sheep right now, and that sheep, Little One, is prone to wandering off. Shelby wakes up one morning to find out that Little One has disappeared again, and Shelby finds himself headed to Bethlehem to bring Little One home.

Shelby has plenty of reasons to be discouraged—he's young and kind of small—but you will never meet a more hopeful shepherd-to-be. That inspiring spirit is evident throughout his story as he makes his way to Bethlehem during the very busy time of the Roman census. And as he meets new friends, retrieves Little One, and gets back home in time to help with the night watch, he finds that his wish for change is coming true in ways he least expected.  His family has miracle visitors and gets miracle news, and a hopeful shepherd's life is changed in ways he had only dreamed of.

The musical features all original music that draws the audience into the hope and courage of this sweet shepherd and his family. The Bethlehem townspeople seem to be caught up in the same optimistic spirit, even though the Roman census taker and his Roman guard are there. No matter who he runs into, though, it's obvious throughout the story that Shelby won't be anything but determined that good is on its way.

And how right he is!
READ FULL SYNOPSIS
"No matter how many times I hear Shelby's story, I still get a lump in my throat. When he's so excited because he's just experienced the most amazing thing he could have ever imagined, I still have to take a moment to choke back the emotion. Even when I shouldn't be surprised all over again since I know what's coming, I am still overwhelmed with joy. Time and time again. It's a privilege to have been trusted with so great a treasure."
​-Wendi Miller, Shelby the Shepherd and His Special Surprise Author and
Shelby The Shepherd, The Musical - A Shepherd's Special Surprise Playwright and Composer
WANT TO LEARN MORE?
Find out even more about Shelby the Shepherd!
"LIKE A WHOLE BUNCH OF LOVE GOT HERE ALL AT ONCE."
-Shelby
"And hope does not disappoint us, because God has poured out His love into our hearts..." (Romans 5:5).
QUICK LINKS
Shelby The Shepherd, The Musical Home
Producers' Info
Shelby's Story
Games & Activities
Books
Contact
Thanks & Credits